Shigakukan University's mission is to nurture talented and reliable individuals who can meet the needs of the society they live in by acquiring Individuality, Knowledge and Skills and putting their ideas and what they have learned into Practice.

Shigakukan University is a private co-educational four-year university founded in 1979.

The university has two faculties: the Faculty of Humanities and the Faculty of Law. The Faculty of Humanities has two departments: the Dept. of Clinical Psychology (consisting of five coursesfor medicine, welfare, education, society and industry, and general psychology) and the Dept. of Humanity and Culture (which is composed of three courses: Japanese and Japanese literature, English language and British and American culture, and history and geography). The Faculty of Law also has two departments: the Dept. of Law and the Dept. of Applied Legal Studies. Moreover, the university has a Minor Course for Teaching Japanese as a Foreign Language which trains students (non-native speakers and native speakers) to be Japanese Language teachers, and a Graduate School of Clinical Psychology. 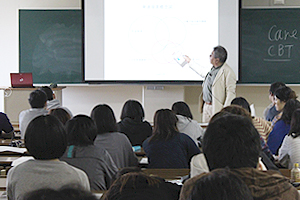 The major courses taught are as follows:

The student population as of 1 March 2014 is 1208 (1203 undergraduates, of which 738 are males and 449 females, and 21 postgraduates).
There are 22 overseas students (Chinese, Taiwanese and Korean) as well. The number of full-time teaching staff is 54, and that of clerical staff is 33. There are over 70 part-time teaching staff as well. And therefore class sizes are small, communications between students, teaching and clerical staff are very close, establishing a very friendly relationship between them.

The university has student exchange agreements with four universities: Anglia Ruskin University (ARU, formerly Anglia Polytechnic University (APU)) in England, The University of Macau (MU) and Changchun Normal University (CNU) in China, Silla University (SU) in South Korea and Wenzao Ursuline University of International Studies(WUUIS) in Taiwan. Furthermore nearly 500 students have enjoyed three-week to one-month home-stay and English study in England in the past 25 years.
The number of exchange students so far. (As of April 2014.)

The university also provides a number of extracurricular coursesfree of charge and helps students obtain high scores on the TOEIC and EIKEN tests, qualifications for financial planning, registered real-estate brokers, administrative/judicial scriveners, and so forth.

Standing on a hill commanding a panoramic view of the City of Kagoshima, and Kagoshima Bay with an active volcano Mt Sakurajima in its midst, the university enjoys both an urban and beautiful natural environment.

Kagoshima has the southernmost station on the Shinkansen Bullet Train, taking approximately 80 minutes to Fukuoka, 4 hours to Osaka and 6.5 hours to Tokyo. It is also 30km to the Kagoshima International Airport by car, and takes only 1.5 hours by plane to Seoul in South Korea or Tokyo. It takes approximately 2 hours to Taipei or Shanghai, and 3 hours to Hong Kong. It is about 8 hours to Singapore via Fukuoka.

The Prefecture of Kagoshima, situated at the southernmost tip of mainland Japan, boasts 2,632 km of coastline and 28 inhabited islands. In the north are mountain ranges with volcanoes and hot springs, and in the south lie islands with unspoilt nature and a delight of foods from a large variety of fish to tropical fruits.

In the middle of the Kagoshima mainland, sandwiched by two peninsulas, lies Kagoshima Bay inhabited by an abundance of sea life which includes sea breams, yellowtails, and dolphins. In the centre of the bay, approximately 4 km from the City of Kagoshima, stands Mt Sakurajima, an impressive and beautiful volcano, regularly erupting and changing colour every day. With such landscape, Kagoshima has been called 'the Naples of the Orient.'

Kagoshima City has a population of 600,000 and boasts a large aquarium, many shopping centres, cinemas and places to eat and drink. Among its special products are satsumaage fried fish cake, karukan sweet cake, dried bonito, beef and pork, and Satsuma porcelain ware.
At the end of the Tokugawa Shogunate, Kagoshima produced a number of promising youth who served as the driving force for the modernization of Japan. Among such men were young samurai students who broke the Tokugawa ban on foreign travel and went to Britain to study Western science and technology.
With four clearly separate seasons, Kagoshima is a very hospitable place to live in and study. A big welcome to you, or as the locals would say, ojattamonse.

Among the student clubs are sports clubs for Kendo, Rugby Football, Table Tennis, Volleyball, Track & Field, and Tennis, all of which have members with skills of national standard, and culture clubs, which include E.S.S (English Speaking Society), three volunteer clubs: Anchor Club, Kataguruma (Piggyback) and Shuwa (Sign Language), JONIKK (international exchange club), Calligraphy, Rock Music, Sounds, and others. Nearly 70% of the students belong to one or other of the clubs. The university has a special overseas students support society which supports students from overseas financially, and a sports clubs support society which financially supports students who compete in regional and national competitions.

The university has a dormitory for girl students located within walking distance (10 minutes) from the university. Most of the overseas students stay here and enjoy international exchange. The university provides assistance for boys' accommodation.

Some graduates continue to study and research at law schools and post-graduate schools for psychology, literature, linguistics, etc.

The School of Clinical Psychology makes full use of the education and research provided by the Department of Clinical Psychology, which helps students to gain an understanding of human nature and learn practical skills in mental health care. The school has two affiliated centres: Psychological Counselling Centre and Child Development Support Centre, where the post-graduates can have practical training in such fields as counseling and psychotherapy and put what they have learned into practice.

Completing the two-year studies at the graduate school provides the route to qualify as a clinical psychologist. 51 have successfully acquired the qualification and work at hospitals, universities and other institutions.

The university provides a free lunch time extracurricular program called 'Eigo Dojo' every day, which is taught by all the instructors in charge of English education. The Dojo's purpose is to help students score over 650 on TOEIC exams and/or pass EIKEN (Test in Practical English Proficiency) Pre-Ist exams.
The highest scores taken so far by Dojo students are 845 and 810.

4 Minor Course for Teaching Japanese as a Foreign Language

A message from a graduate Wang Yiping.

This is our first English website, which gives you a glimpse of our university. Having moved the campus to the centre of Kagoshima City in 2011, building a new gym in 2014, and evolving new and interesting programmes of study, our university is continually developing. I hope this website will help overseas students to better understand our university.
Thank you for visiting our homepage.

Shigakukan University welcomes students who are motivated, enthusiastic and forward-looking.

2. The Second, Third and Fourth Year

The following scholars are selected by the applicant's examination results in SU and others.